Promobot from PNRPU has been in France 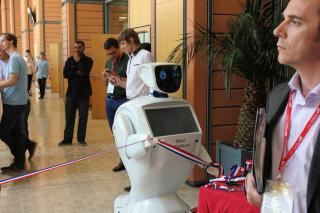 From 1 till 3 of July Innorobo 2015, the greatest Europe international exhibition-conference of achievements in the area of robotics, took place in Lyons. Two robots participated in the conference opening. While the mayor of the city was cutting the tape, Japanese well-known «emotional» robot Pepepr  and Russian Promobot  held its borders.

Prombot is a project of students and postgraduate students of PNRPU. Now they are working at it at Limited Liability Company «Promobot» which founders are Alexey Yuzhakov, Oleg Kivokurtsev , Maxim Utev, Igor Eremeev and Maxim Chugunov.

French company Hoomano, that produces software for different robots, is planning to buy the clever robot. Together with the Promobot company they will create new applications and promote the production.

Honorary consul of Russia on economic activity in France Eddie Dio promised that Perm Promobot would be introduced into Lyons airport. The passanger traffic of the airport is more than 8.000.000 passangers. Moreover, the robot