Students from China arrived in PNRPU under the exchange program

03.09.15
Students from China arrived in PNRPU under the exchange program 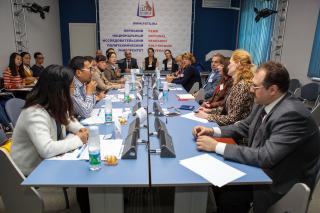 Under the realization of the agreement about collaboration between PNRPU and East China Jiao Tong University (Nanchang) (ECU), rector of PNRPU Anatoly Alexandrovich Tashkinov welcomed official delegation of ECU led by Head of Department «Marketing» Shen Pengyi in the university on September 1, 2015.

On delegation of East China University were:

During the meeting representatives of ECU and PNRPU discussed the necessity of science innovative projects and academic programs of universities promotion. Realization of the exchange education program between the universities (English program) has laid foundation to maintain and expand cooperation spheres between the universities. Thus, under realization of this project, 8 Chinese students were enrolled as 3d year students of PNRPU, course «Economics» from September 1, 2015 till January 30, 2016; 6 students of PNRPU were enrolled as ECU students under the education exchange program from September 1, 2015 till January 30, 2016.

Under the visit of East China Jiao Tong University delegation from 1 till 4 September, 2015 meetings with Heads of Departments of Faculty of Humanities departments and academic staff are planned to discuss possible spheres of co-operation in the field of academic and science mobility: ECU representatives will attend exchange program classes, know about academic process and science directions of economic profile departments.