03.12.18
Professor from Japan told students about problems of interaction between people and smart machines 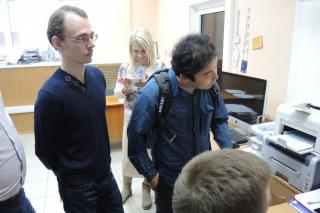 On November, 27 professor Hirotaka Osava from Tsukuba University, Japan,  prelected  public lecture  about "The interface of humane machine: social aspects of a robotics". The Tsukuba city is known as the city of the advanced scientific researches, and Tsukuba University is among leading ones in Japan.

Hirotaka Osava told about research and development of service robotic engineering in Japan, the importance of "social" robots for solving social and humanities problems, as well as the problems of interaction between people and smart machines.  After lecture PNRPU scientists performed laboratories, which are based on the electrical engineering faculty and the  head of robotics Center  demonstrated the latest development.

New objectives and goals are set and PNRPU researchers are ready to implement them together with new partners.