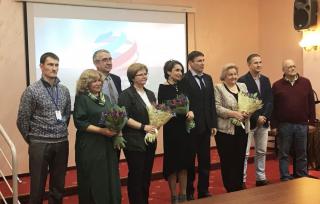 The conference is held annually. It is aimed at development of the international cooperation in engineering and natural sciences, and also at advancement of innovation development of Perm Krai. It is the platform that unites the leading Perm and foreign scientists, graduate students of higher education institutions, representatives of business area, investors and authorities.

During the conference  there were presented the activity results of 19 international research groups. Each project has two project supervisors: Perm and foreign one, around which the team of students and postgraduate students is organized.

In total, this year  projects involved more than 120 leading scientists, students and postgraduates of the Perm region, as well as scientists from 22 near and far-abroad countries.

Due to this unique project, organized by the government of the Perm Krai, our University strengthens its positions  on the global scientific stage, demonstrates the growing potential for the development of an innovative economy based on the results of the introduction of scientific developments in production, and Perm science continues to give more and more reasons to be proud for.

The PNRPU winning projects are the followings:

We congratulate winners and we wish further success!