Perm Tech and TU Wien: How did it get started? 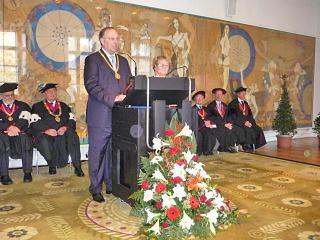 For all seasons, the main historical task of universities was the preservation and development of knowledge, especially through the exchange of knowledge between teachers and students. Changes in the content of professions due to the global process of convergence, as well as the beginning of the reform of the domestic economy foredestined the beginning of cooperation between European and Russian universities. Since the 1990s, we have seen at first hand the first successful educational projects initiated by the leading universities. The success of cooperation was largely followed by personal contacts.

The Acquaintance of Professor Tamara Serowa (The Head of Foreign languages, Linguistics and Intercultural communication department, Perm Tech) with professor Peter Skalizkiy, the future rector of TU Wien was milestone event. Thank to Professor Serowa and her vision of future cooperation between our universities, it was possible to set up such longstanding and solid partnership.

After working visits, bilateral negotiations, the agreement between Perm Tech and TU Wien was signed.  The main areas of cooperation were the following: water treatment, waste disposal and recycling, computer equipment and automation, mechanics of materials and structures. Since 1992 Professor Serowa has been the coordinator and cooperation leader of joint projects within the framework of the agreement.

In 1997 there was initiated the first large joint project in the framework of Tempus Tacis funding. The project was devoted to the introduction of environmental sciences to engineering education. The key partner in this project was TU Wien.

The project coordinators from Perm Tech side were Professor Serowa  and Professor Yakov Vaysman (The Head of environmental protection department). The project funding was 600000 US Dollars. There were more than 50 staff members who took part in the project.

The main goal of the project was to develop instructional programs of environmental study packages and to implement them into the curriculum and state educational standard of university faculties and departments.  The successful realization of the project let to increase essentially academic mobility of the students, postgraduates and academic staff of Perm Tech. Also the project helped to improve the quality of the learning services, to enlarge university footprint in international educational area and to lay the groundwork for future new EU projects.

The development of relations between universities at the level of "Professor-Professor" allowed to conduct joint researches, organize conferences, as well as to start academic mobility: more than 150 professors and 100 students and postgraduates of Perm Tech took courses and advanced training at the TU Wien.

On the other hand, Austrian professors came to Perm Tech for workshops and lectures, and students and postgraduate students of TU Wien also visited Perm Tech for internship and exchange education..

— For us the cooperation with TU Wien became kind of "Window on Europe". Our partnership laid the foundation for international activity at Perm Tech,- mentioned Vasiliy Petrov, the President of Perm Tech.

On the eve of the 30th anniversary of cooperation between TU Wien (Austria) and Perm Tech, there will be a series of articles devoted to various aspects of the relationship between our universities.