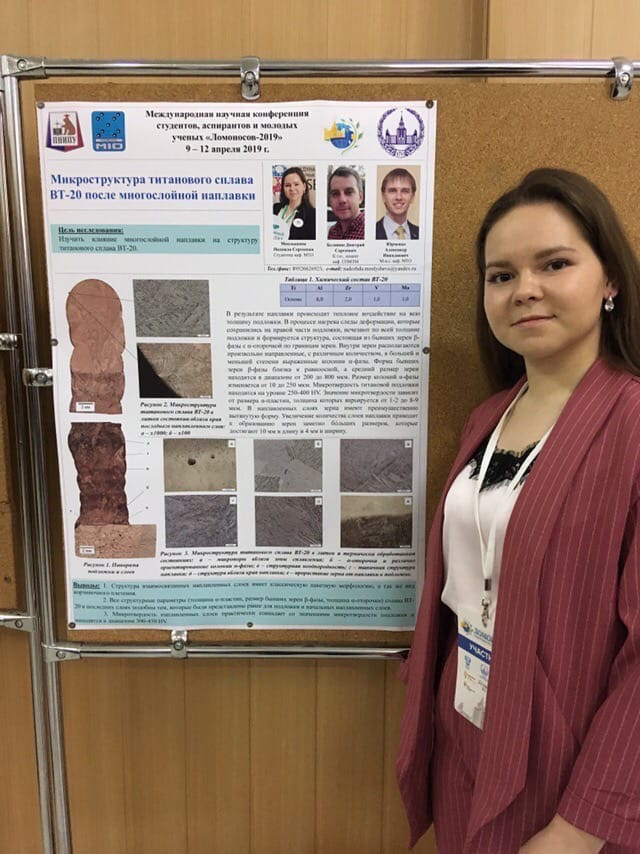 “Titanium is one of the youngest construction materials. It is known as the 21st century metal and the space age metal. Any other metal has such a rapid development in its production. It can be explained by the fact that titanium has a unique combination of mechanical and physical properties and occurs in nature in large amounts. Titanium’s properties can vary depending on the alloy structure, which in its turn is affected by the material processing. One of the advanced methods of processing is gas metal arc welding,”- says Nadezhda  Menlysheva, the fourth- year student in Mechanical Engineering faculty.

As the basis, the young scientist chose well-known gas metal arc welding. This process is used to repair constructions, which are made of hard materials, for example steel. According to the student the production methods for titanium alloys and their composition are poorly studied. Perm Tech scientists made an alloy with build-up technology, so called Additive Manufacturing technology. Due to these technologies it is possible to produce parts with any desired properties, which cannot be made with other material processing. Such parts are fabricated layer-by-layer with 3D-printer. The advantage of producing metal with additive manufacturing is reduction in material waste. The material is added and formed layer by layer, rather than cut out of a solid figure.

“Casting parts can be replaced by objects created via additive technologies. It will not be necessary to use lathe for giving the casting object a desired shape. One should only melt the outline, machine it and get the end product. For instance, titanium casting is very labor intensive process, which requires special equipment, vacuum treatment and raw material preparation. This technology allows getting parts made of complex alloys and non-ferrous metals and reducing material waste. This method will shorten the production cycle and make the production more effective,”- explains the developer.

The student researched the structure of examples made of titanium alloy ВТ 20 after melting in different conditions. Then she found the structural differences and described how the structure changed depending on the number of layers. The developer examined the structure of the example’s central part and edges. She checked if there were any faults in the zone of melting. She also researched the hardness of the examples to compare the alloy’s behavior in the deformed state and in additional layers. Due to the data analysis she chose the most effective method of building-up welding. Using building-up arc welding, the developer has already made 1 example, which consists of 30 layers, and 4 examples, which include 3 layers.

Student thinks that this method will be useful in aircraft building, mechanical engineering and machine’s repairs.