26.03.18
Ambassador Extraordinary and Plenipotentiary of Switzerland in the Russian Federation visited PNRPU 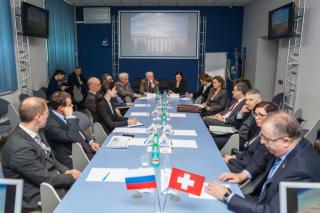 On March 22 the diplomatic delegation from Switzerland headed by Mr. Yves Rossier, Ambassador Extraordinary and Plenipotentiary of Switzerland in the Russian Federation, visited PNRPU.

The meeting began with a welcome speech of Anatoly Tashkinov, PNRPU Rector, who told about the experience of cooperating with École Polytechnique Fédérale de Lausanne (Switzerland) in the framework of the "Cooperation on metabolism and diabetes," on the basis of the Scientific and Educational Center of Applied Chemical and Biological Researches operating at PNRPU.

Vladimir Korotaev, Vice-Rector for Science and Innovation, outlined the priority directions of scientific activities aimed at the introduction of resource-efficient technologies for sustainable development of the region. Colleagues from organizations in Switzerland have been invited to join the international consortium within the framework project started in Russia related to creation of competence centers working with cross-cutting technologies within the National Technology Initiative (NTI). At the moment, it is planned to create 14 such centers (each according to its technology).