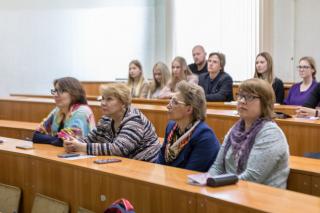 The German-Russian Days of Science were carried out on the base of Perm Tech on 20th of May. The event was held in order to find new partners for scientific and educational cooperation, identify the challenges and problems that science, education and society face within the context of globalization.

As part of the event, an information seminar of the German house of research and  innovation (Moscow) was held, as well as presentations of the German Federal States: North Rhine Westphalia and Lower Saxony. In addition, popular workshops of scientists from Germany were held. Doctor of science Christoph Wünsch from the Dresden University of technology in his report raised the issue of the need for separate waste collection, and Professor, doctor of science Frank Regener from the Cologne University of applied Sciences devoted his speech to the problems of industrial wastewater treatment.

It should be noted that the partner organizations of the German house of science and innovation (DWIH) are German universities, research institutes, scientific associations and research foundations (DAAD, DFG, Helmholtz Association, Free University of Berlin).